The professional behavior of the team has changed a lot in the last nine months. We have personally seen this change in many employees.

As a Manager, I tend to do the analysis and found that the pandemic has created a deep scar in many minds and hearts.

The first thing we noticed is anger. Nearly 42% of the employees are getting angry with or without genuine reasons.

People are getting short-tempered soon. The reason is, their mind is not shifting between job and personal life at the end of the day. The mind lives in the job even after closing the laptop. And this was not the scenario before the pandemic. When we take our laptop bag and start from the office, we had many things to visualize in reality to adjust our minds.

The human touch between the team members is slowly vanishing, and it creates a rough situation between teams. The personal activities like chit-chat, team-break, movie times, road trips had brought personal bonding among people. We are losing those forever now.

According to the survey by 7th Fold, 36% of employees are affected by mental health and 17% with physical health. The survey has revealed some interesting data. People with less than 5L annual salary are worried about personal finance and career prospect. But surprisingly, people with more than 20 or 30L salary reported burnout and poor mental health.

These guys are going to handle the team. If they feel burnout, they are going to burn the bridges between others. Actually, stress is leading to burnout.

The deadline of tasks alone is the reason for 48% of stress. These were not the main reasons before the pandemic.

Actually, with very-small efforts, we can come out of this work-related stress very soon.

Finally, Self Care is Not Selfish!

A new norm is there everywhere. So it should be there in the sales presentation and pitch too. Rewrite your sales pitch. Redesign your presentation. Revisit what you are selling.

The conventional “cold email” and “cold call” is going to be tactless in this situation. The same old way of “one-stop-shop” is not going to fetch any more water. Adjust your team to the new reality.

As per a survey, it requires six times more effort to convince a client for a deal than earlier. So the best part is to hold your clients very close to your heart. Often speak to your customers. Communicate proactively with them.

Reassure your client that you can understand their pain because they are also crossing the same situation.

Whatever may be the situation, the closure should keep on happening. Revisit your old leads. Engage with your earlier prospects. Analyze why they didn’t give you the business last time.

Finally, speak to your delivery organization to bring them on board with you on keeping the “Customer First” attitude.

Personal tip to sales guys: Don’t shift job now. Sell what you are well versed in all these days rather than going to new selling. It is not just you are going to sell. It’s the brand name of the company which is going to help you to sell.

The synchronization of what you have with your company and your selling skill is your real motivation. You cannot sell yourself and also the brand now. It is a risky task.

Are we bloating small things to a larger magnitude or our startup situation is this real bad?

I remember 2007 recession and this was exactly the scenario on all tech news sites that time. Social media was not this prominent then. But since I was in the US that time I read a lot of shutting down news like these.

America was matured enough to handle 2007 recession because they learnt from 2001 recession already.

2001 was dot com bubble burst and though it was recorded for 8 months only, the effect lasts for three years and unfortunately, Sep 11 happened at the tail end. The total unemployment was just above 6.3% then. It was after 10 years from the earlier recession which gave a big room for the companies to play safe (earlier recession was during 1990-91)

Recession 2007
But 2007 recession was housing bubble burst with banks going into the huge financial crisis. The recession lasted for one and a half years with the unbelievable unemployment rate of 10.3% with a GDP dip of -4.3%. It was called as great recession of US after 1929-33 recession.

Since all the above was epicentre in America, they had the courage and experience to overcome those.

The current Indian IT recession is of Startup and Marketplace together. The profitability of this predicted 2016 recession would be as bad as 10%, predicted by Morgan Stanley.

Even though the economy of India seems to be at a steady growth rate, the Government will not be in a position to bail out anyone here since it is from the Startup and Marketplace sector and not from large players.

Even if Indian Reserve Bank wishes to lend hands to these Startups and Marketplace players by lowering the lending rate to banks, they don’t have much elbow room this time like earlier to jump to the rescue.

Recessions are compared to Flu. It will surely affect even if you are in the vicinity. This recession was earlier mentioned as “around the corner”. But the signs what we are getting across the globe, particularly the hopping of Chinese bubble has now made to say “India has already started walking into the recession”

Recessions are very much part of macroeconomics that happens time to time in the entire world. Since this time it is going to be Great Recession of Asia, everyone is keeping their fingers crossed and making all arrangement to cross the chasm peacefully.

The answer could be a yes when compared to 2014 and 2015. Where it was about 7.1 Billion USD and now we are not even sure of reaching half of it.

According to Traxcn data, Indian tech startups have raised nearly 959 million dollars in the last quarter of 2015 which is less than a third of the 3.2 billion raised in the earlier quarter. But it is again just half of what they have raised during the Q4 of 2014 which is 1.9 billion. 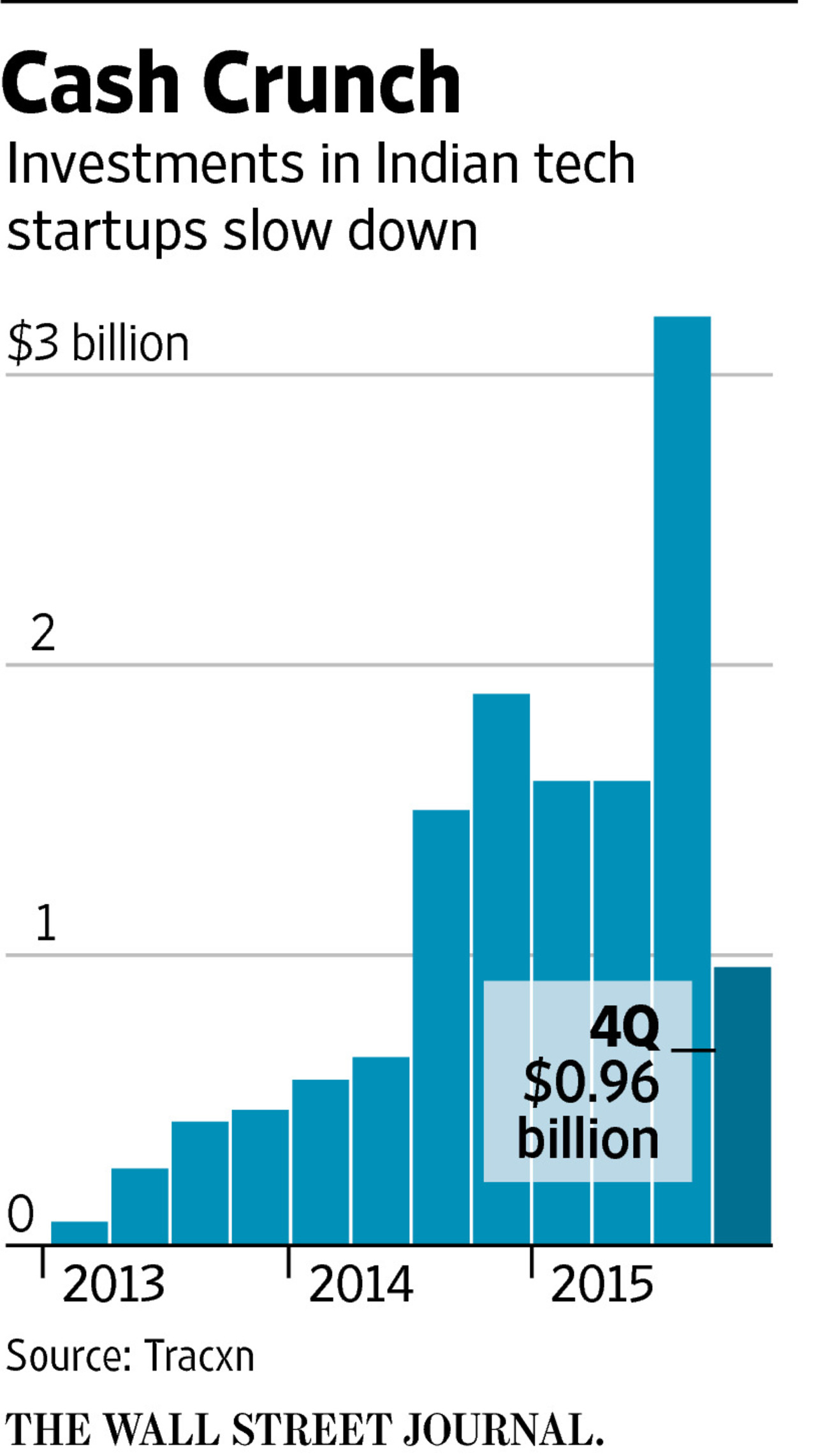 Does that mean the Funding has dried totally?

No, the amount of startups aroused in the last two years is huge and most of these startups got really well funded in 2014 and 2015.

There are huge competitions in these segments and so the factor that determines the uniqueness of these companies are missing.

On the other hand, the Startups are on the other path. Since they have understood the market very well, their main aim is to get funded as much as possible at the quickest  and exit as quick as possible too.

To be frank, you can very well see that there is not much long term aim or goal for most of these small startups.

This is nothing but a real froth which would not continue forever. There needs to be a cleansing  required and which has already started. There will be a vanishing stage of most of the “one another startup” following which the funding will once again come to the normal track.

Did the froth affect the genuine Investors? No, funding for the deserved startup is still going on as normal.

As I always say, the best practise of any firm or industry is to have a Plan B. That is the course correction. This is exactly what is happening in Indian Tech Start-Up Funding Industry.

Indian Tech startups got heavily funded in the last 2 to 2.5 years and many of them are not able to cross the Series A funding. This is the major reason for the funding industry to have a slow down and take the course correction.

So there is no need to worry as the funding industry is completely dried. It didn’t and it will not too. This is just a cleansing happening. Moreover, the so-called funding industry has nothing to do other than to fund again rather than keeping their money parked at one place. They are not meant to park money. They are there for the purpose of rotating the money and growing it as much as possible.

The amount of money got funded and the number of startups got funded in the last 2 or 3 years are phenomenally high and either they should get funded to the next level or shut down. This has already started and that is what is seen as slow down. The sooner this cleansing happens the earlier the funding will get to its original speed.

In the current situation in India, the most unwanted word is “attrition”. Being the appraisal time every management and HR would think more about attrition and burn their midnight oil.

Out of my experience, I would say, attrition is a healthy scenario than people sticking to their job without any innovative contribution. We need the core team who can transform our vision into the mission. But if we are not ready to bring in new blood either by replacing or expanding our core team we are not actually growing.

Attrition also gives room for the next level people to take the steering and start driving.

Some of the advantages of managed or Healthy attrition are:

Let us see one by one.

Think where we were a couple of years back and what was the contribution by those people that time. They would have contributed many best practices and ideas into our vision which would have taken our company to this level.

Don’t we need the same type of new blood again now to take our company to the next level?

Best Ideas from their Experience

The new guys will surely bring in their best ideas and best practices out of their experience which will enable us to take our company to next level.

The main reason for anyone to become less productivity is their monotonous work routine. It could be the need of the company or project. But these guys also require a change in their work routine.

Since monotonous leads to productivity loss, it is always better to leave that scenario.

Though I bring cost as the last element here, it is also a very important factor to be considered. If a person becomes less productivity because of any known or unknown reason, is it not better to bring someone with relevant years of experience to that position with less cost?

Last one which is most important

If the people who leave us and shines at another place, is it not a pride to us too? If you are a leader you will surely feel so. If you are just a manager you will have grudges on them. The option leaves to your level of maturity.

So there is no need to burn the midnight oil thinking of Annual Appraisal.